Home > Caring For Your Horse > Is Racing Horses Humane? 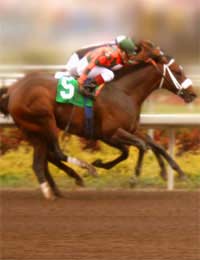 Debate has always raged over whether racing horses is humane or not and, the chances are, it always will. Humane societies have had their say, as have all of the different people involved with horse racing and the answer, it seems, is nowhere near as cut and dried as you would like. But on the whole, it must be remembered that humane societies and animal welfare groups exist to prevent cruelty to animals and they have not yet banned horseracing as a sport, so therefore, it cannot be as inhumane as some of its detractors would have the public believe.

One of the biggest myths associated with horseracing is that as soon as a horse gets an injury it is shot and killed. But of course, in reality, this is far from the case. And, as time marches on, people involved in horseracing are becoming more attuned to the needs of their horses. More racehorse rehabilitation centres exist than ever before so that when a horse does develop an injury, it can be sent to a centre to help it to recover. And even if the injury is career threatening, there is no certainty that the horse will be shot. In fact, the horse could be sent to a racehorse retirement home or rehabilitated and sold to someone who wants a horse for pleasure and not for racing.

The other key thin when considering whether horseracing is humane or not is the people involved. Just as with other equestrian sports, the majority of the people invoked with the sport love horses. This can be the jockeys, the trainers, the stable hands. The one thing they all share is that they love horses. And even owners – mercenary as they may be portrayed in the media – they usually love horses too, and would not want their animals to suffer, even if they are not making them money. Therefore, because of this love for the animals, the injured horse is as likely to be sent to a retirement home as shot.

The humanity of horseracing is called into question far more often than the humanity of other equestrian sports such as showjumping or dressage. And although racing is more frenetic than these sports, it boils down to the same thing - a horse is intensively trained to take part in a sport for human interest. But people often see showjumping as a sport taken part in for the love of horses and racing as a moneymaking endeavour. But if horses can be trained to jump over jump after jump in an arena, why not be trained to race around a course as fast as they can?

There are some races and courses that raise people’s emotions more than any other and nowhere can this be more pronounced than at Aintree when the Grand National takes place. Horses regularly die on this course and animal rights campaigners, on the whole, feel very strongly that these courses are cruel. Of course, the death of a horse in competition is regrettable. But it is not the purpose of this article to sit in moral judgement on one course or another, simple to put the facts and allow the reader to decide for themselves. The simple truth is that it will never be possible to state whether racing horses is humane or not. There will always be people on both sides of the argument and many more on the fence and middle ground. But one indisputable fact remains – horseracing is a well-loved, popular sport which horse lovers indulge themselves in, just as much as those other equestrian sports. The question is, would they be true horse lovers if the sport were not humane?

How to Care for a Racehorse

How to Care for a Horse

Stable Management
Share Your Story, Join the Discussion or Seek Advice..
I love the way that small groups of people try and destroy industries that provide a living for hundreds of thousands, or millions.Let's shut down lumber production because an Owl may be in danger.Let's end egg production because the poor hens are treated bad, and let's stop horse racing because it inhumane.Millions out of jobs, and animals put out to pasture to lay around. Who will care for them?Not the 20 or 30 people that say it's bad.Nope. They just want to keep themselves employed. Horse racing is a fine industry and is a great way for people and horses to both enjoy themselves.Many horses love the show. You can tell by watching them perform.Let's leave them alone and let the industry go forward.I don't bet on horses, but I see no issues with the industry as it stands.
BevEl - 6-Feb-14 @ 5:02 PM
Title:
(never shown)
Firstname:
(never shown)
Surname:
(never shown)
Email:
(never shown)
Nickname:
(shown)
Comment:
Validate: