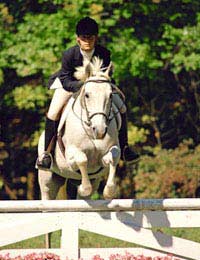 Britain is a nation of sport lovers. No sport is too odd or obscure for our attention, as long as we are doing well in that field. The only problem is our attention span is rather short unless the sport in question is football, cricket or tennis. With anything else, no sooner have the Olympics finished, than we switch back to the old favourites. But considering that we are not world leaders in any of the afore mentioned sports, it is quite surprising that we have never fixed our collective, long-term attention on a sport in which we truly excel. One such sport is showjumping. Britain has long held the world’s attention when it comes to equestrianism, show jumping included. And with good reason – it is a sport, where Britain always ranks highly at the Olympics. But this success is not limited to the Olympics; Britain also does well in world championships, both senior and junior.

As Britain has developed such a love of reality TV, and most other disciplines have been turned into a show using the format, it was surely only a matter of time before showjumping became a reality entity. And in 2006, the BBC decided to use our nation’s expertise for a charity programme called Only Fools on Horses. The show saw several celebrities take to riding and jumping with varying degrees of success. The programme’s most important function was to cement showjumping into people’s minds. Viewers realised that this was a dynamic and exciting sport. What’s more, the expert tips and coaching from such names as Tim Stockdale helped to prove that Britain knows what it is talking about when it comes to a sport such as showjumping. The show propelled showjumping into the nation’s psyche and held it up as an example of something in which Brits excel.

Of course, the other times that most non-riders have come into contact with the sport of showjumping is at the Olympics. All equestrian events have long been a strong field for the British team and the nation has a good history of medals in the sport to back this up. In fact, equestrianism is one of Britain’s top five Olympic sports- ranked up there with the likes of sailing and shooting as sports most people know relatively little about, but when the Olympics roll around we have a vague understanding that these are the ones to watch to see our medal haul soar. In Athens, the British team came away with three medals at the Olympics and eight at the Paralympics. And the connection between national pride, equestrianism and Britain was cemented at the 1976 Montreal Games when Princess Anne became the first, and, at the moment, the only Royal to compete in a Games.

Olympic success may be what captures the nation’s excitement but there is no shortage of equestrian wins in other places. At the moment, Britain holds the gold individual eventing world medal and the team silver. In addition, the junior teams are also excelling at a world level, meaning that Britain can be assured of its place on a world stage for some time to come.

Zara Phillips, eldest granddaughter of the Queen and 11th in line to the throne, is the current poster girl for eventing and showjumping. She is following in her mother’s footsteps as an expert sportswoman and although some claimed her victory at BBC Sports Personality of the Year in 2006 was favouritism, many agreed it was a well deserved accolade. Phillips brings plenty of glamour and excitement to the sport, and, more importantly, has alerted the British public to the fact that here is a sport of which we can be justifiably proud of our achievements. Phillips is, at the time of writing, eventing world champion and also a member of the team which holds the silver world medal. She was made an MBE in the New Year’s Honours 2007 for services to equestrianism. In general, Phillips has proved as popular with the public, for her down to earth nature and rebellious image as she has with those in riding circles and the ever present paparazzi. She is a true ambassador of all that is good in British riding.

Britain looks well set to dominate the equestrian scene into the future. Within the country, it is a well funded but not always well supported sport. While those who move within riding circles are fiercely loyal to their sport, the public has not yet developed a love for it. There is a flurry of interest every four years but this has yet to be changed into something more concrete. Perhaps the likes of Zara Phillips can change this, and encourage more people to take up eventing or showjumping. And the more interest the sport garners, the more youngsters will join and the more success Britain will have.