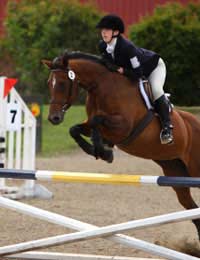 There are many different types of jumps including show jumps and cross country jumps. There are a variety of all of them, aimed at both experienced and less experienced riders and horses. Each different type of jump should be approached in its own unique way. Each one will present a new set of challenges for both horse and rider and test their teamwork.

There are plenty of different types of show jumps but here is just a selection:

Cross country jumps are usually very different to show jumps. Even in appearance they are noticeably different. They are usually very rustic and are made of rustic, organic looking materials. They are jumps which look at home in the countryside and fit in with their surroundings.

Cross country jumps comprise lots of jumps with ditches dug out of them. The logs are often set up to form angles as jumps, and palisades are straight and solid jumps. A good jump for a beginner to start on is a table fence which is made of a series of logs, fitting together as a table, for the horse to run along.

Most jumps can be turned into water jumps with the addition of a trough or ditch of water on one or both sides of the jump. This makes the jump much harder. The horse will be expected to either clear the water completely or to land in it and run through it, which will obviously slow it down.

Jumps are usually found in combinations rather than on their own. They are normally set up in a circuit for a horse to take a set number of steps between them. Riders need to show boldness courage and agility to be successful jumper, while the horse needs to be familiar with all types of jumps. Train him on each one before he is expected to jump it in competition. And if you enter a horse into a jumping competition, always walk him around the course before the contest starts so you and he are fully prepared for all of the different types of jumps.