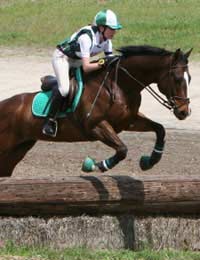 There are hundreds of showjumping contests throughout the country. Some are organised by clubs for their members and others by clubs for neighbouring clubs to compete against them. The Pony Club and other similar organisations also put on competitions to allow children and new jumpers to have a go at competing. Most of the contests are organised by or affiliated to the British Showjumping Association (BSJA) and this allows riders to compete in bigger and harder competitions and progress through the ranks. When riders first start to compete in showjumping contests, it can be a daunting prospect, but most people relish the challenge and thrive on the nervous energy and excitement they get before a big competition. Also, competition is the only way to truly judge yourself against other riders and therefore, is a benchmark that riders can give to themselves to help improve their jumping and riding as well.

The BSJA has a range of novice contests with smaller fences for people who are just starting to jump competitively. These can be used as qualifying competitions for the bigger contests later on. Those are aimed at riders with more experience. The British Novice Championships is one of these novice contests and has a maximum fence height in the first round of 0.90m. The Discovery Competition has a maximum first round height of 1m while both the Members Cup and Newcomers have 1.1m. The Foxhunter competition’s maximum first round height is 1.2m. These heights all relate to adults’ contests and most competitions have a junior section too with smaller fences.

The heights of the fences are progressive, getting higher the better a rider you become. This is to make sure competitors are ready for each competition they enter and are not entering contests which are above their ability. It also teaches the correct jumping technique for bigger fences as the rider will have to master smaller ones first. But, if all goes well, and the rider progresses through the various competitions, they could find themselves competing at one of the most prestigious showjumping competitions such as the Festival of Showjumping, the Royal International Horse Show or the Horse of the Year Show.

Qualification takes place over a year. This year runs from May 31 to June 1 the following year rather than following a calendar year. A rider and horse have to get four double clear rounds in this time to qualify for the next level.

There are plenty of qualifying competitions across the country year-round and a rider should never find themselves at a loss for contests to enter. There are more than enough chances to achieve all four if the rider, horse and their partnership are all good enough.

The BSJA system does work. It means that riders stay within the affiliated system and will in time; qualify for bigger and better competitions. What is more, the BSJA has a hand in selecting riders to compete abroad both individually and in teams and even at the Olympics. So riders competing in affiliated events who reach the dizzy heights of the top shows, could, in time, find themselves standing on a medal podium. It’s a dazzling incentive to do well and one which spurs many riders onto greater and bigger achievements.