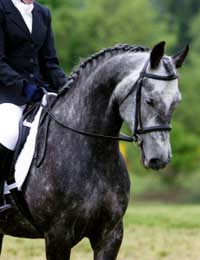 For dressage, an arena is laid out strictly and must be exact. The arena is used for the different manoeuvres in the sport and each one must be completed at the right points. Therefore, there can be no variation in the layout as riders would not know what to expect. The standard arena is 20m by 40m but longer arenas at 60m are used for higher standards of rider.

The letters start with A which denotes the entrance to the arena. A is in the middle of one of the two shorter sides of the arena. Directly opposite A, in the middle of the other shorter side is C. The judges sit behind C. Across the top, one of the long ends; there are K, E and H (assuming A is on the left of a plan). On the longer arena, V is between K and E and S is between E and H.

Across the bottom of the plan, on the other longer side, will be F, B and M. Again, there are two more letters on longer arena – P is between B and F and R is between M and B.

As well as the letters, dressage riders should bear lines and circles in mind. The centre line, from A to C is important. It is never marked, but every rider needs to know where it is. As the judge sits at C and the entrance is A, the rider will enter riding directly towards the judges who will be able to see any deviation from the centre line.

The rider will also be expected to be able to perform circles of riding. These will be centred on different points in the arena and should be practised beforehand.

The rules of dressage state that outer markers need to be clear. The rider should be able to spot them clearly. However, it is still wise to know exactly where they are as there will always be times when you will need to know exactly where you need to head for the next movement without turning your head to look. The marker at position A should be far back from the entrance to the arena. This will allow the horse to enter the arena on a completely straight line, rather than coming at it from an angle, even if it is only a slight one.

The arena and its layout is an important part of dressage. Learn the layout and where the markers are and you will only have yourself, the horse and your riding to think about. You need to be able to execute moves exactly, so having to turn to look at markers before you move will not help. The preciseness needed to do these moves is the beauty of dressage and every rider should be as prepared as possible.