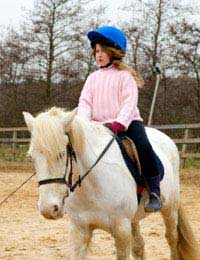 When people start horse riding, they can become bemused by the different terms used to describe different types of horses. Several different names can be used for the same horse and some horses are more suitable to some types of riders than others. Here we try to explain a little of the explanations behind each name used for a horse.

Pony is the most common term you will hear used to describe a particular type of horse. Most children learn to ride on a pony and because of this, many people mistakenly believe that a pony is a young horse. This is not the case. Pony refers more to the size of the horse and within the category of pony, there are many different breeds. As a general rule, a pony is a horse which is 14.2 hands or less tall. Anything taller than this is a horse. Larger ponies are often used by adults but the temperament of a lot of ponies means they are well suited to being rides for children and beginners. However, there is a tendency for ponies to become spoilt if they are exclusively ridden by someone who does not know how to control them.

A thoroughbred is a type of horse which, conversely, beginners will not be likely to ride. The term can be used to describe any pure bred horse - but strictly speaking, it refers to that particular breed of elite horses which are usually used for horseracing. Thoroughbreds in this sense are all descended from one of 74 foundation mares in the 1700s. Although thoroughbreds are used for their racing ability, they can be prone to health problems, often because of their intensive training. They are also bred to create cross-breeds - not as pure as a thoroughbred but still valuable in its own right.

A gelding is a male horse which has been castrated. They are often used as amateur mounts for equestrian events as they are seen to be a clam and stable horse. They differ hugely from stallions - male horses which have not been castrated - in their temperament as they are much quieter and the rider is much more able to control them.

Stallions have not been castrated and are used for breeding and continuing a strong bloodline of horses. They are sometimes used for riding but because of their nature, and the fact they will be attracted to other horses, they can be unpredictable and it can be a touch risky to have them around other horses. For this reason, some types of equestrian events do not allow stallions, so as to minimise the risk of injury to other horses and nearby humans.

There will be plenty of other terms you may hear people use to describe different types of horses, but the major ones are outlined here. Other names which may be heard will include a mare, which is a female horse, a colt, a young male horse and a filly, a young female horse, all of which have their own particular characteristics.

Improving your Fitness for Horse Riding