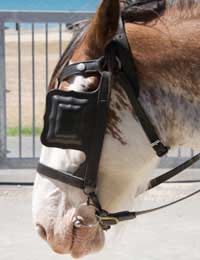 Blinkers and reins are two important pieces of tack, although the novice rider will certainly come across reins before they do blinkers. Some riders and horses never use blinkers at all, while others swear by them. Reins are obviously a main factor in controlling any horse which is being ridden while blinkers tend to be for more advanced riders but those who use them also say they are vital for having the optimum amount of control.

The main reason you would choose to use blinkers is to restrict the horse’s vision to a path in front of him and limit his peripheral sight. This technique keeps the horse focussed on what is ahead, both literally and figuratively speaking. It means he has near to tunnel vision and is more likely to concentrate on carrying you than what is happening around him. Horses can get distracted fairly easily so blinkers certainly can be a good idea. If horses see things in their peripheral vision they are likely to duck and dive. When they are going at a high speed or pulling something behind them, this can clearly be catastrophic.

They are usually made of leather or a plastic leather substitute and are most commonly seen on racehorses and driving horses. For driving horses especially, they stop the horse from becoming spooked and bolting – resulting in chaos. Blinkers are usually attached to the cheekpieces of the bridle. But on more advanced racehorses – those who compete at a higher level - the blinkers form part of a bigger face mask which fits over the horse’s whole head.

Blinkers can be cut back to varying lengths to allow the horse to see more or less, as the rider desires, and the more you get to know your horse, the better idea you will have about how long to make his blinkers.

After the stirrups, the reins are the most important piece of tack for the controlling of the horse. Not only that, but for beginners, they give the rider something to hold onto to feel secure and prevent themselves falling off. The reins allow the rider to communicate with their horse, via the bit. The reins are also used to turn a horse to the left or right and to stop the horse. While it is not sufficient for a rider to use only the reins as a means of communication, they certainly could not do without them either.

Reins need to be held in a certain way to be effective. The little finger should be tucked underneath the reins with the other fingers on top. The hands should then be turned so the thumbs are pointed upwards. If the reins are held or used incorrectly, not only will the horse not understand what he is being asked to do, but he could be hurt. The bit sits in a part of the mouth which is not sensitive but if it is moved around by poor use of the reins, it may seriously hurt the horse’s mouth. You should also never tie a horse up by the reins attached to a bit for the same reason. If he pulls away it will hurt him as he jerks his head back. Always take off the bridle and put a halter on before he gets tied up.

The blinkers and reins are two more pieces of kit which you need to know about, and how to put on and take off. The higher the level, the more important the blinkers get, especially if you plan on racing. But for beginners, the focus will be on the reins as you learn to become a skilful rider with full control of the horse.

A Glossary of Tack

How Riders Use Stirrups