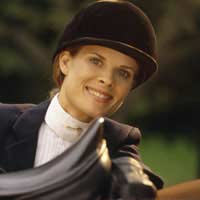 Novice riders will come across many unfamiliar words during the course of a few lessons. Many of these words are not heard on a day-to-day basis outside of riding circles so a little explanation for many of them may be necessary. Below are just a few of the most commonly used words and expressions which new riders may not be familiar with. These can include horses’ body parts, equipment and actions, as well as gaits – the different walk and runs which a horse can do. These are just a selection of the most common words, you will soon get to know many more:

For most parts of a horse’s body, it is usually not sufficient to refer to, for example, its leg or head – there are many more specialised words which refer to particular bones, joints and even tendons, which are all commonly used in paddocks around the country.

Withers – The withers of a horse is the muscular ridge where its neck and back join. It is the highest constant point on a horse, and, as such, is the point where all horse heights are measured from. It is also the point of reference teachers will give you when teaching you where to holds the reins.

Rump/croup – The rump, or croup as it is also known, is the fleshy area at the rear of the horse. This is often referred to in beginners’ classes, as it is the rump you will need to swing your leg over to mount and dismount the horse.

Fetlock – You will often hear people refer to the fetlock. It is the joint at the base of the horse’s leg, above the hoof. It can be seen quite clearly, as it usually protrudes from the rear of the leg.

Muzzle – The muzzle, much like that of a dog, is the area of the horse’s head covered by a halter. This includes the nose and mouth parts.

There is a bewildering array of equipment needed to ride a horse, and many novices can come unstuck when asked to pick up a certain item – having no idea what they are looking for. Below are some of the most common terms.

Tack – Tack is the name given to all of the equipment which goes on the horse. You may often hear people talking about tacking up or a tack room - where all of these accessories are stored.

Bridle – The bridle is the straps which fit around the head of the horse and which you attach the reins to. The bridle also has a bit fitted which goes into the horse’s mouth.

Halter – A halter is headgear which covers the horse’s muzzle. It is used to direct the horse, via the reins and is similar to the bridle, but has no bit.

A gait is a movement of the horse. There are many gaits, but just four natural types, which the horse does not need to be taught specially. One of these is a walk which will be the first thing you learn as a novice, followed by the other three faster paces.

Trot – The trot is the first gait learnt other than walking. It is a fairly slow movement, and is identifiable by the diagonally opposite legs moving together. As there are two moments when the horse’s hooves touch the floor in each stride, or two footfalls, it is a two-beat gait (which gives rise to the familiar ‘clip-clop’ sound).

Canter – A canter is faster than a trot, but slower than a gallop. It is easily identified by its distinctive three footfalls per stride, which can be heard clearly when a horse is cantering on a harder surface. It is a fun gait and one which many riders choose to use when going out for long hacks with their horse.

Gallop – The gallop is the fastest natural gait. It has four footfalls per stride and is the gait of choice for racehorses. Due to the power needed to gallop, most horses cannot gallop for more than about a mile and a half. Racehorses on longer courses can go for a couple of miles. The gait would have been used in the wild to escape predators so there was no need for horses to be able to gallop for miles at a time.

This is just a brief overview of some of the words which are likely to crop up in beginners’ riding lessons. The more advanced a rider becomes, the wider their riding vocabulary becomes. You will soon get used to all of the strange words and find yourself using them too. The language is used constantly in horse circles and before long you will be explaining to friends the differences between a canter and a gallop.