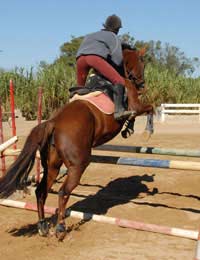 Olympic eventing has been a firm fixture for many years and remains one of the most popular spectator sports at the Games. It is notable for two reasons – along with the other equestrian disciplines – in that firstly it is the only Olympic sport where man and animal compete on an equal footing as teammates. Secondly, it is also one of a very limited number of sports where men and women compete on equal terms – and the only one where they can do so as individuals – in all other mixed sports, there are rules stipulating a mixed team must have a man and a woman – such as badminton.

Horse riding was a fixture, and a popular one, in the ancient Olympic Games. So the sport has been popular for a long time, and has always been seen as a prestigious and noble occupation. Horse riding, that is, equestrian events, at the modern Olympics did not come into being until 1900, with the three-day event added in 1912. Three-day eventing was then included on the programme as part of the riding schedule that we know and love today.

But curiously, perhaps due to its noble origins, civilians were not allowed to take part in eventing, which was at first restricted to military personnel. The other equestrian disciplines were open to civilians, but not many took part until 1948 when eventing was opened up.

This is also partly due to the fact that few people practised the sport in an international capacity – and those that did all knew each other – and the judges.

In each Games, rules tended to be bent to allow local variances and it was not until 1921, that it was decided as the sport was now an Olympic one, an international set of rules were needed.

As well as eventing – the three day versions – the Olympics also sees contests in showjumping and dressage. The eventing sessions are held in both mixed and individual contests.

Great Britain has always enjoyed considerable success in eventing at the Olympics, and in recent years, a good medal haul has always been on the cards. The team placings are usually decided first with the individual then judged afterwards. Riders are not usually expected to ride twice, once for team and once for individual. A team can be made up of five members, but only the top three scores will count towards the team placings. The showjumping is left until last and is generally seen as the showcase event and the most popular with spectators.

To compete at the Olympics is one of the highest honours a sportsperson can have. And this is no less true than in three-day eventing. The equestrian events at the Olympics are often seen as the pinnacle of a rider’s career and something the vast majority of competitive riders will be aiming for. For horses too, an owner will dream of taking them to compete at the Olympics, and if they get there, they will be feted on their return, it is assured.