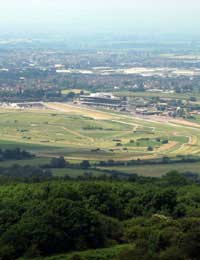 The Cheltenham Festival is, to many, the absolute pinnacle of the racing season in England – if not the world for some. Punchestown may be more of a party, the Breeder’s Cup may be more glamorous, but nothing has the cachet of Cheltenham, nothing exudes pure passion for racing the way Cheltenham does. And although every meeting at Cheltenham is special, that one week in March when the eyes of the racing world are upon a town in Gloucestershire, there is no more special place to be in the world. So, for the uninitiated, just what is the Cheltenham Festival all about?

Prestbury Park, on the edge of Cheltenham, and nestled against the Cotswold Hills is a spectacular racing venue and one which is sure to raise the spirits of any racing fan. Walking onto the course for the first time of the hundredth time is an awe inspiring sight. And when the stands are packed with expectant punters for the Festival, all intent on seeing some of the best jumps racing in the world, the sight is even better. It is a beautiful course, with stunning views, plenty of facilities and an attractive parade ring for getting a good look at those horses before the racing starts.

One of the most special things about the Festival is the Irish connection. Thousands of Irish race fans come over for the duration of the festival, and plenty of horses, trainers and jockeys come from the Emerald Isle as well. Some of the best horses in the world are Irish and their inclusion in the festival helps to make it what it is. Another big thing with the Irish connection is the timing. St Patrick’s Day often falls during the festival, and therefore prompts an even bigger party. But it is not just the Irish contingent which enjoys this – everyone joins in the party and makes the most of the two events colliding.

The Gold Cup takes place on the Friday of the Festival and is the blue ribbon event, the showcase event. It’s a demanding race over jumps and has made stars of horses which have won it – in recent years, the contest between Kauto Star and Denman has transfixed race fans although both came unstuck to Imperial Commander in 2010. The race is seen as one of the key races, if not the key races, in jumps – the Grand National might have more general appeal but the Gold Cup is the one most prized by professionals and the one with the most skill involved.

The Cheltenham Festival has to be experienced to be believed. The atmosphere is unbelievable. But do not attend Cheltenham expecting an Aintree crowd or an Ascot dress code. This is all about the racing. Yes, people like to look good – but racing good. This an event to go to for the racing and not to be seen. But it is also an experience anyone who likes racing will never ever forget.