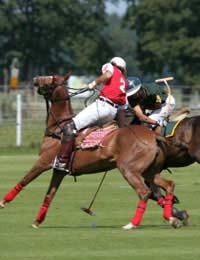 Like sports such as netball, polo requires players to adopt a very specific position and stick to it. Each position has a very specific role and most teams, certainly for outdoor polo, have four players. The skills needed for each different position vary greatly, and, such as in sports like volleyball, it does not follow that a player who excels in one position will necessarily be able to shine in all of them. In fact, the opposite may be true, a player who is a brilliant number one may be a poor number four.

The number one player can often be the player who takes the glory. Number one is the goal scoring player, and, as such, is required to play upfront for much of the game. The number one player is also expected to neutralise the defence of the other team. Many polo players and coaches agree that number one, when played correctly, is the most difficult position to master.

Number two player is also a forward, but in this position there is much less emphasis on scoring goals. Number two plays the game hard and adopts a certain amount of defensive skill too. The fastest pony is needed for the number two player as they are required to obtain the ball a lot, and often after number one has lost it from a missed shot on goal. The number two is also needed to take part in ride-offs with the opposite team’s number four player. This is when the two make contact and try to push each other off the line. It is actually the ponies who do the most of the pushing but the players can use their bodies too.

Number three is often seen as the technically best player. Number three links the defence and the attack, and thus brings the whole team together. The idea of the number three position is to turn every ball into an attack for their team. Of course, in practice this is not always possible but a player who adopts this attitude makes for a great match. Number three is usually the leader of the team as well because of their strategic role within the team and is responsible for playing a lot of long balls.

Number four is the main defensive player on the team. The primary role of a number four player is to stop goals being scored by the other team. Number four needs to make sure the ball stays down the other end, so as soon as he gets it, plays it back to his teammates far away from his goal. Polo is generally an attacking game but nevertheless, the position of number four is vital, especially when playing a stronger team.

There are four human players on a team but also four ponies as well. The team of eight is just as important as the team of four. The ponies do an awful lot of the hard work – just the running around the field is enough in itself. And the positioning of the ponies is important too – they need to excel in the position they are asked to play in, just as their human teammates do.