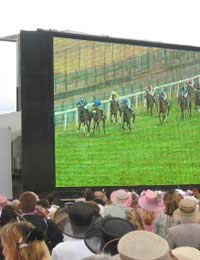 The other main type of horse racing, after National Hunt racing, is flat racing. In many countries across the world it is by far the main type of racing, in some, it is the only sort. In Great Britain, the two types are roughly equal, while Ireland, where steeplechase racing was invented, flat racing is by far the lesser of the two in terms of popularity. Flat racing is truly a global sport and it exudes glamour, drawing the attention of the media wherever it is.

Flat racing certainly offers many advantages over steeplechase racing, both in terms of competing and spectating. Flat racing usually takes place in the warmer months, usually in the summer, which is always more pleasant for taking in the sights and sounds of a race meeting. Also, the prize money is much bigger in flat racing – an incentive to any jockey. This money is reflected in the breeding of horses. It is big business. The best horses cost a lot of money, and for those who can breed or train winners, the riches on offer are many and varied. Businessmen who invest in horse racing need to know what they are doing – if they do, they can make themselves very rich indeed.

Some of the flat racing meets in the UK are among the biggest and most prestigious in the world, attracting the attention of the world’s media and all horse racing fans across the globe. In terms of gambling, everyone likes a flutter on the Grand National or the Cheltenham Gold Cup, but the glamour lies in flat racing.

Ascot is undoubtedly the biggest name for flat racing, certainly in the UK - perhaps even the world. This festival of racing in June attracts coverage whatever happens – not least for the parade of ‘names’ and celebrities on show. Royal Ascot is the highlight of the five day meet. Renowned for its celebrity guests and outrageous hats, it is the meet everyone has heard of and everyone wants to be at.

Goodwood is a beautiful festival which is slightly more relaxed than Ascot. But it is not to say that it is not glamorous – that, it certainly is. The highlight of Goodwood is Glorious Goodwood, an action packed day which attracts the beautiful people as much as any other festival.

The Derby at Epsom has to be the biggest single flat race in the world, to say nothing of its fame. It is a hard race and one which jockeys and horses are well respected for doing well in. They need a lot of skill to manage the Derby course with all of its undulating ground.

Flat racing is not an easy sport to become heavily involved with, but it is a massive sport within the equestrian fraternity. It is not just because of the beautiful people that it is popular – although this is a draw. But the undeniable skill and talent which jockeys need, and the dedication of the horses, means it is a sport to be admired and inspired by in equal measure.